As usual for this conference, we are planning a “plenary session” during the morning of the three days of the symposium, whereas the afternoon will be devoted to oral presentations in two simultaneous “thematic sessions”. The poster's presentations will take place at the end of each day. In addition, four 45-min-long Keynote talks are scheduled and covers different aspect of the Andean geology. The organizing committee kindly thank Ms. S. Mahlburg Kay, and M. P. Molnar, V.A. Ramos and E. Calais for accepting to give a keynote talk during the next ISAG.

We kindly ask you to check the ISAG webpage (www.igepn.edu.ec/8isag) in order to access the full programme and other additional information.

We also invite you to check the accepted abstracts at the following link: www.igepn.edu.ec/8isag-abstracts

We received more than 250 abstracts for the 8th ISAG. The organizing committee distributed the oral and poster presentations based in the author’s preference as well as in the abstract’s contents. The accepted abstract concern most aspects of Andean geodynamics. Some editing was performed by the Organising Committee, however, we would underline the fact that authors are responsible for the quality of their abstract. The final distribution has been revised and accepted by the ISAG scientific advisory board. Final instructions and updates will be e-mailed to registered participants a few weeks before beginning of the symposium and posted on the ISAG webpage (www.igepn.edu.ec/8isag).

The Organizing committee choose a group of abstract to be presented as oral communications during the morning’s Plenary talks. These abstracts were selected following different criteria such as their broad implications on Andean geodynamics, as well as trying to respect a regional equilibrium.

Based on the received abstract, the organizing committee organize them in several thematic sessions that include:

Talks will last 12 minutes each and will be followed by 3 minutes of discussion. For oral and poster sessions, the preferred language is English, although Spanish is also accepted. However, there will be no facilities for simultaneous translation. We request that your presentation will be uploaded in two formats (pptx and pdf) the previous day of the talk. The organizing committee will install a technical desk close to the conference rooms.

In order to prepare the final program and avoid the potential “no-shows”, we kindly ask that the authors to check the tentative program, and report to us in the case that you cannot attend the meeting.

There will be a poster session each day (from 17h00 until 18h30). Posters will remain on display all day long. Maximum dimensions for posters are 80 cm in width (horizontal) and 110 cm in height (vertical). Poster orientation is portrait. Each poster will be numbered (please see the final programme) and must be hung at its corresponding place at 8:30 in the morning of the day planned for it. 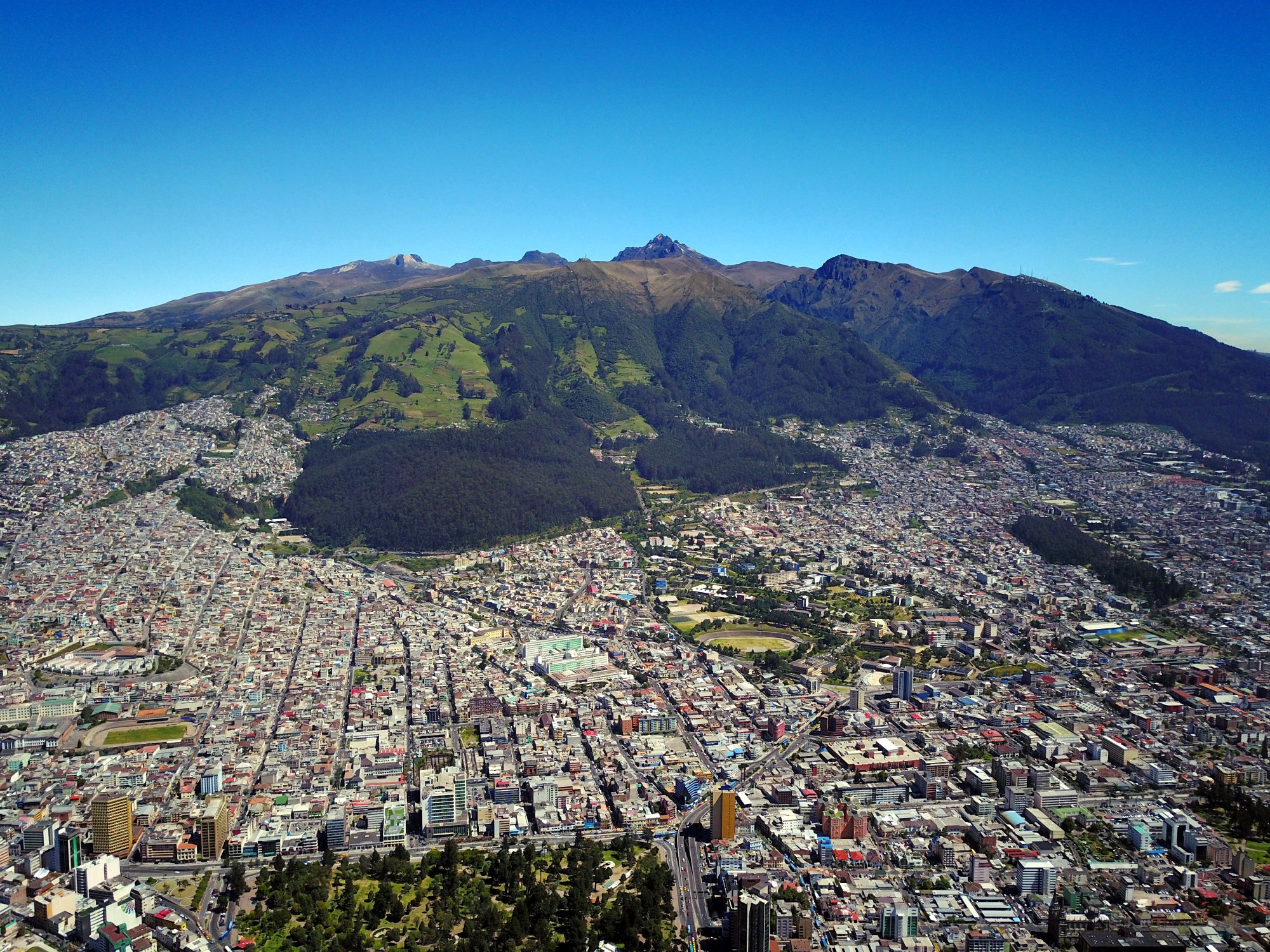 Photo by B. Bernard.

Registration for the ISAG Symposium will be in the lobby of the official Conference Hotel Mercure. Registration schedule will be the following:

All participants must register and collect their ISAG ID to participate in the symposium.

Registration fees do not include regular meals, lodging, or transportation.

You can access the Registration Form by clicking here.

Given that we are less than 1 month from the symposium, no refunds will be made.

If you sent a written notification of cancellation to the local Organizing Committee (Esta dirección de correo electrónico está siendo protegida contra los robots de spam. Necesita tener JavaScript habilitado para poder verlo.), refunds will be processed after the conference. Remember, an administrative charge (30% per participant) will be deducted from the cancelled amount.

The IG-EPN and IRD are pleased to inform that an important number of special grants were preferentially allocated to scientists and students from South America and will include registration fees and lodging (in double room) at the conference hotel (Hotel Mercure Alameda Quito). Recipients of these Special Grants were communicated in the previous weeks.

Your airport Transfer IN to symposium Hotel Mercure is included. If you would like to take advantage of the free airport transfer to the Hotel, please send us your complete flight information (Airline and Flight number, arrival and departure info) as soon as you can.

Airport transfer will only be provided to those who send their flight information and only between the nights of the 22nd and until the morning of the 24th of September.

In the case you have any flight delays or flight cancellations, please let us know by Email or Whatsapp/Text to +593 999 800 438 so we can coordinate a new pick up time for you.

An Ice-breaker will take place on September 23th and a Conference closing cocktail on September 26th. The costs are included in the registration fees. To attend, please mark these options when registering on the webpage.

Our online registration is closed!

Tungurahua volcano is one of the most active volcanoes of the Ecuadorian Andes. After ~75 years of quiescence, Tungurahua reactivated in October 1999 and remained active until March 2016. During this time, the volcano experienced low-to-moderate eruptive activity characterized by frequent explosions, local ash dispersal and frequent lahars. However, its pattern of activity changed in 2006, when one subplinian eruption occurred (August 16th) and produced large pyroclastic density currents and regional tephra dispersal. Since then, eruptive activity evolved to short-lived violent Strombolian to Vulcanian episodes followed by smaller explosions and frequent ash emissions (February 2008, May 2010, December 2012, July 2013, February and April 2014, February 2016).

The main goal of this workshop is to commemorate the 20th anniversary of the beginning of this eruption by bringing together volcanologists that have worked or still work on Tungurahua, and more broadly researchers interested in how andesitic volcanoes work.

We seek contributions from different approaches, such as physical volcanology, petrology, geophysics and those interested on the social issues associated with this long-lived eruption period.

UPDATE: You can access the full programme from this location.

Tungurahua volcano is an archetypical andesitic stratovolcano located in the Eastern Cordillera of the Ecuadorian arc. It is one of the most active Ecuadorian volcanoes with at least 4 eruptive episodes during historical times (i.e. since the beginning of the Spanish conquest). These eruptions include the 1641, 1773, 1889 and 1916-1918 events. In 1999, just before the Tungurahua reawakening, Hall et al. (1999) published their pioneering work on the eruptive chronology of Tungurahua volcano. Based on this work, Tungurahua was constructed by 3 successive edifices, the younger being the Tungurahua III that was formed during the last 3000 years, after a large sector collapse. During the last two decades, a series of in-depth studies was devoted to improve several aspects of the geological and petrological evolution of this volcano. Among the most important advances, we should mention: (1) a new geochronological dataset that allows to better constraint the main eruptive stages of this volcano and to estimate its eruptive and erosion rates; (2) the efforts to propose a new, high-frequency eruptive chronology for the last 3000 years BP; (3) the new geochemical and petrological data for the last 3 millennia, that allow us to identify the pre-eruptive magmatic process active at Tungurahua.

Tungurahua volcano in its nearly 20 years of on-off eruptive activity that began in 1999 produced a huge suite of seismic, infrasound, deformation, laharic and gas signals, and as well an important dataset of visual and infrared images. Since 2006, this volcano has a permanent and modern network of broad band seismic and infrasound stations. Real time data streams were used to forecast possible strengthening or decline of volcanic activity. Temporal deployments of geophysical instruments have also contributed to enhance our understanding of volcanic activity. Strong correlations also exist between patterns seen in the geophysical data and surface activity (ash falls and gravitational flows) of the volcano. In this session we invite those who have worked on Tungurahua geophysical data to present the results and perspectives of their investigations. We would also like to explore other avenues of investigation to be made with the existing data bank that could be exploited through collaborative research.

This session aims to present the main results from volcano-physical studies of the Tungurahua 1999-2016 eruption from the ground up. In order to define the volcanic activity, it is critical to obtain qualitative and quantitative data on the eruptive processes. These data are mostly obtained after detailed field work using up-dated acquisition and processing methods. Tungurahua 1999-2016 eruption exhibited almost every volcanic phenomenon including gas and pyroclastic plumes, pyroclastic fallouts and density currents, lava flows and lahars. The study of those phenomena and their deposits allowed to extract eruption source parameters and test numerical models. Based on the results obtained and their comparison with geophysical monitoring data we would like to open a discussion about the eruptive dynamics at Tungurahua that would be useful for long-term hazard assessment and short-term crisis management. This session is also the opportunity to focus on the debated characterization of Strombolian, violent Strombolian, Vulcanian and sub-Plinian eruptive styles at Tungurahua and other andesitic volcanoes worldwide.

Once the eruptive period in the Tungurahua began in 1999, hazard assessment was aided by a hazard map prepared in 1988 (Hall et al) which was used to discuss with the authorities and the community on the preparedness plans and mitigation activities. With the new information that was acquired afterwards by the IG researchers, this map was reissued in 2002. Later on, with the experience of what happened during the great eruptions in 2006, a new hazard map of Tungurahua was prepared in 2008, accounting for the effects of these eruptions and that map has been used for hazard mitigation up to the present. The first ash falls that occurred with the initial explosive activity of the volcano gave rise to the generation of the first lahars. The IG installed lahars detectors in the Juive and Vazcún ravines, where they most frequently occurred; this way, a first system of early warning for lahars was initiated, with the participation of authorities, vigías and the community. This was the base for the definitive implementation of the Early Warning System that worked successfully in the following years and until the end of the eruption. We will have different presentations that will discuss how the evaluation of the threat of the volcano was carried out and the experiences on the implementation and application of the Tungurahua Early Warning System. 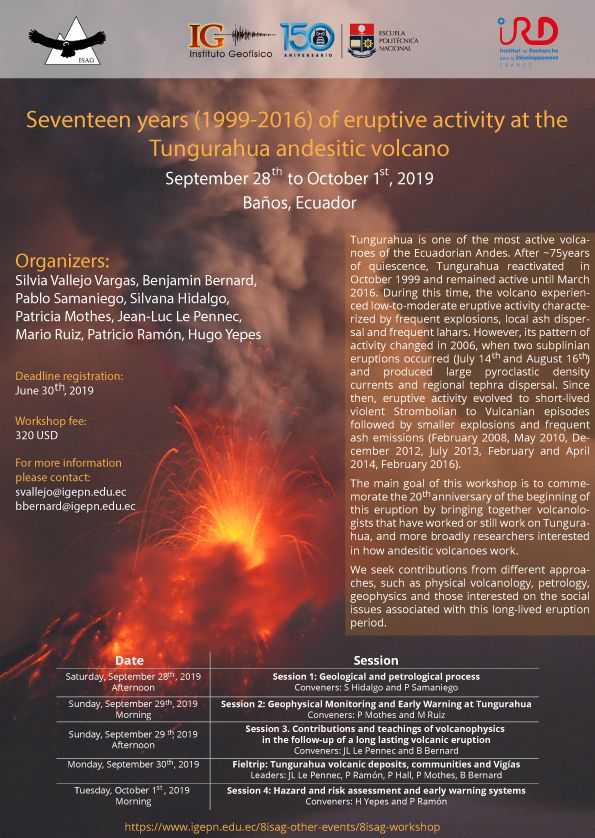